Provisioning of Late Antique Constantinople: Annona Civilis and Beyond 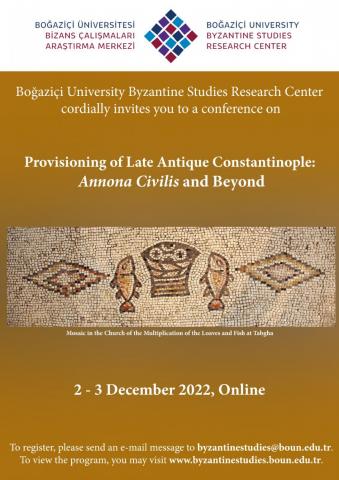 The new capital of the eternal Roman Empire, Constantinople, was a stage for most impressive imperial processions, a site for grandiose religious and imperial buildings, and a home to vast
shopping streets and fora. All these activities and places found meaning when large crowds were present, but such large crowds could not reside in cities with poor provisioning capacity. Late antique Constantinople’s social and cultural activities, economic life, and the interactions between its residents and the state machinery took place in the background of a provisioning system that made possible the constant movement of commodities and people in and out of the city.

In spite of its importance, the provisioning of late antique Constantinople is an understudied subject compared to the supply of the city in the Middle Byzantine period or the provisioning of Imperial Rome. The scholarly production on the subject is mostly dated to the twentieth century. The online conference, organized by the Byzantine Studies Research Center of Boğaziçi University and entitled “Provisioning of Late Antique Constantinople: Annona Civilis and Beyond,” aims to bring together the new evidence from recent excavations in both modern Istanbul and in other regions of the Empire that contributed to the supply of Constantinople (from the fourth century to the early Middle Ages) as well as new insights resulting from the re-reading of written sources in the light of new theoretical approaches. This process will most definitely lead to a new understanding of annona civilis, and, as a result, to a deeper knowledge of a major facet of the economic life of the late antique Eastern Roman Empire

Please send an email message to byzantinestudies@boun.edu.tr for registration.

Note: The times given in the program are based on GMT+3 (Istanbul time).