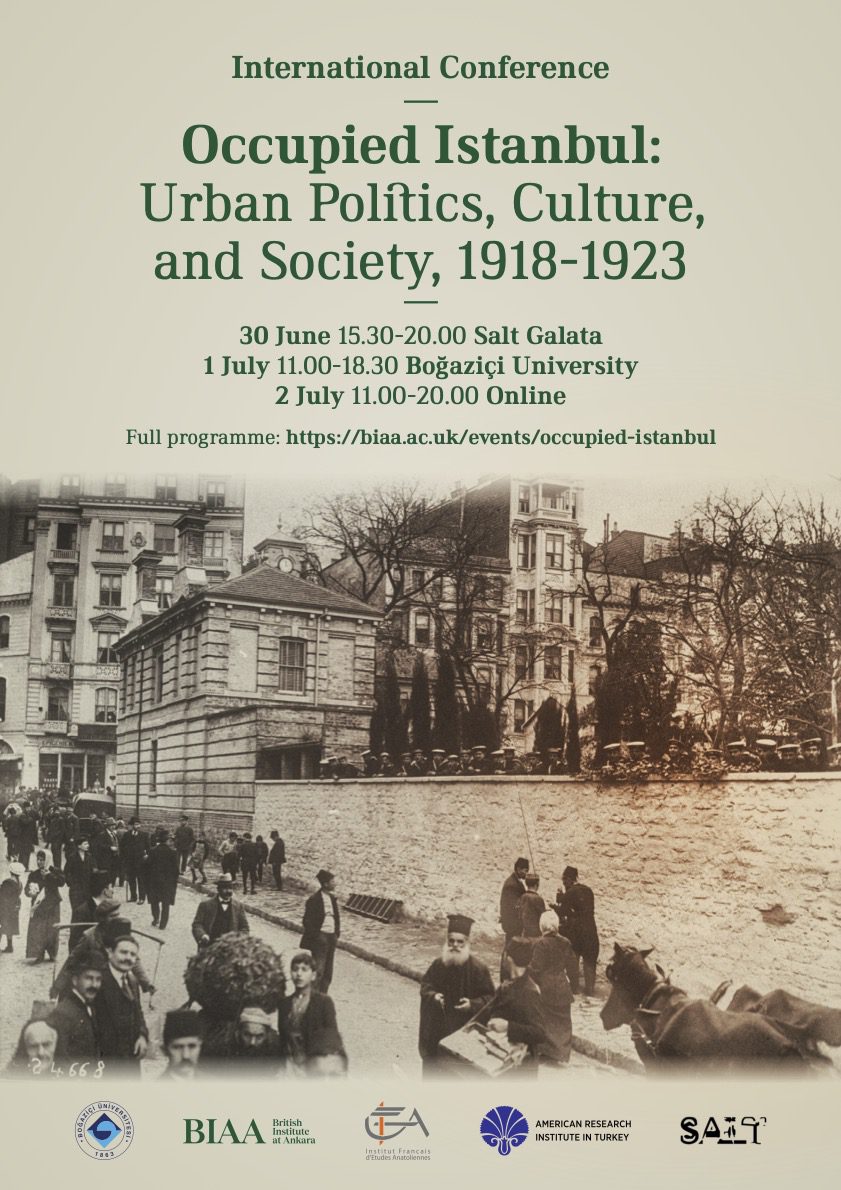 On the morning of 16 March 1920, British military forces, which had been present in Istanbul alongside wartime allies France, Italy and Greece since November 1918, conducted a series of arrests of high profile former and serving Ottoman officials and officers, took control of multiple government ministries, and declared martial law. It was not until 6 October 1923 that Allied forces departed the city. The centenaries of the official occupation of Istanbul and its evacuation present a useful moment in which to promote a more comprehensive study of the politics, culture, and society of the period. Despite the wealth of relevant multi-national archival holdings available, the occupation has been largely ignored in public memory and academic writing in the former occupying powers and is often marginalised in the Anatolia-focused history of the War of Independence in Turkey. The conference, a partnership between the American Research Institute in Turkey, Boğaziçi University Department of History, the British Institute At Ankara, Institut Français des Etudes Anatoliennes, and Salt Research, brings together many of the scholars who have worked to fill this historiographical hole in recent years, and will provide an opportunity to discuss how occupation impacted issues as diverse as politics, policing, music, archaeology, commerce, fashion, the press, labour, infrastructure, justice, and housing.

The conference will take place over three days. Below you will find a schedule and zoom link for each day. Anyone wishing to attend days 1 or 2 in person should send a confirmation email including their full name and workplace or institutional affiliation to istanbul19181923@biaa.ac.uk.

Ellinor Morack (Bamberg University), “A date that needs to be engraved forever in every Turk’s heart”: Commemorations of the “martyrs of March 16” in the Republican Press.
Silvana Rachieru (University of Bucharest), Occupied Istanbul seen from Sıraselviler street: diplomatic perceptions and survival strategies at the royal legation of Romania.
Ayşe Polat (Medeniyet Universtiy), Imperial, occupied, and national: Ottoman religious bureaucratic administration in Istanbul.
Ümit Fırat Açıkgöz (American University in Beirut), Urbanism under occupation: the homeless and the visionary in Istanbul.

Ryan Gingeras (Naval Postgraduate School), Making sense of the end: Thoughts on writing a history of the armistice period.