CANCELED - A regional archaeological perspective on Tarhuntašša and Tabal: the Konya and Karaman Plains during the Late Bronze and Iron Ages 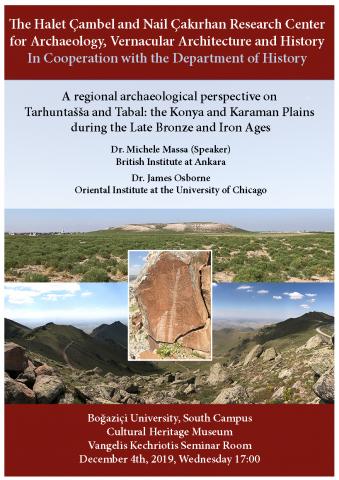 A regional archaeological perspective on Tarhuntašša and Tabal: the Konya and Karaman Plains during the Late Bronze and Iron Ages

In 2019, the Konya Regional Archaeological Survey Project and the Türkmen-Karahöyük Intensive Survey Project brought to light exciting new evidence about a previously unknown Late Bronze and Iron Age regional centre in the Konya Plain. Türkmen-Karahöyük, one of the largest settlements in pre-Classical Anatolia, is almost certainly the royal seat of King Hartapu, whose Hieroglyphic Luwian inscription found at the site describes his exploits across the country. We further propose that the site might have been an important centre of the elusive kingdom of Tarhuntašša. Here we present the preliminary results of the 2019 intensive survey, the philological analysis of the inscription, as well as an assessment of the socio-political dynamics in the region contemporary with the apogee of Türkmen-Karahöyük.

Michele Massa, a BIAA Honorary Fellow, has received his PhD degree from University College London in 2016 and has previously held an assistant professorship at Bilecik University (2016-2018). He is the co-director of the Konya Regional Archaeological Survey Project. Michele’s primary area of interest is the prehistoric Eastern Mediterranean and Near East. He specialises in landscape archaeology and different aspects of the process of urbanization and state formation -including water management, warfare, long distance exchange networks, administration and elite behaviours.

James Osborne is Assistant Professor of Anatolian Archaeology at the University of Chicago's Oriental Institute since 2015, and he has received a PhD degree from Harvard University in 2011. Having worked at Tell Tayinat since 2005, he is now director of the Türkmen-Karahöyük Intensive Survey Project. James’ research focuses on the intersection of space and power, using analysis of Anatolian monumental buildings, cities, and settlement patterns during the Iron Age as his primary subject matter. Methodologically, he incorporates quantitative methods like GIS, space syntax, and geochemical ceramic analysis with native historical and iconographic source.