Belgium and the Ottoman Empire: 'Transnationals' and Diplomacy in the Age of Capital 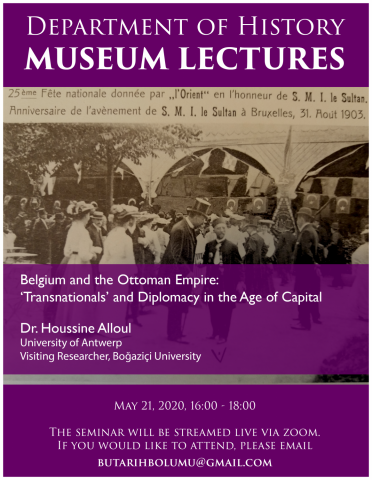 On the eve of the First World War an intricate complex of investments worth millions of francs and spanning railways, mines, public utilities, and the Ottoman sovereign debt connected the Kingdom of Belgium to the Ottoman Empire. Tracing this formidable, yet almost entirely forgotten, political, economic and social entanglement back to the start of Belgian mass-industrialization in the 1830s, and switching back and forth between Brussels and Istanbul, my talk seeks to uncover the complex sets of shifting transnational class alliances – between high officials, Palace dignitaries, MPs, diplomats, engineers, bankers, and entrepreneurs – that lay behind it. Amplifying why such intricate webs of interpersonal relationships have remained obscured in the international history literature on interactions between the Ottoman Empire and Western Europe, I firmly place the Ottomans, small nations, and capital onto the forefront of the analysis, demonstrating how states interacted with each other through ‘real’ (often unofficial) people and private interests, and how the discursive barriers between the official and unofficial, the public and the private, and the so-called West and non-West were always in flux. My research draws on both printed and handwritten sources from state and private archives in Belgium and Turkey.

The seminar will be streamed live via Zoom. If you would like to attend, please e-mail butarihbolumu@gmail.com